iPhones Firmware update 2.1, seems to have gotten rid of the problem. If now only Apple would fix the damn calendar bug

Have you recently sent an email from your beloved iPhone and have it delivered - empty? Then when you look at the sent on your phone you get the lovely: “This message has no content”. 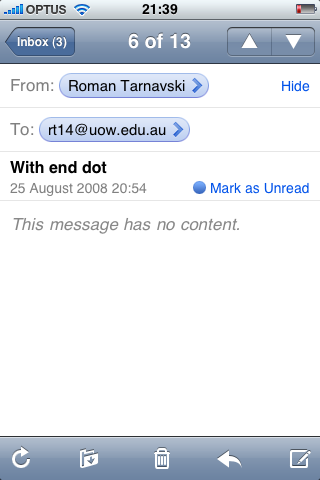 It was simple - the problem was my signature. Which constituted of a simple ‘•’. An elevated full-stop, also known as bullet-point.

There appears to be a bug in the iPhone that is as follows:

If I didn’t know better, I’d say that upon Unicode conversion upon sending, the email becomes corrupt through a rogue parser.

Quite an oversight on Apple’s behalf, and has only appeared since the 2.0.2 update.

Moral of the story - don’t have a bullet point as the last character in your emails, let alone your signature.

Have you noticed any strangeness in your iPhones behaviour?